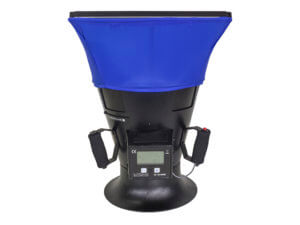 There are several ways to accurately measure airflow in a heating and air conditioning system. A common a piece of air balance equipment, that looks something like this photograph, is used in office environments where it is easier to get to a defuser than the ductwork.

There are also products that can measure airflow through a small hole in the ductwork. There are still others that are mounted more permanently on the system at strategic points, like next to an air filter to determine when the filter should be changed. What kind you need should be discussed with an air balance professional.

In order to understand air balancing in air conditioning systems, we have the help of an example.

Typically service organization will use what is called the relative approach. That is where you go through and test each of the diffusers or registers in the building or on the floor and get a percentage actual of airflow in relation to the planned airflow. The one with the lowest percentage of airflow becomes the key diffuser and all others are balanced to it.

Once several defusers have been set to 79% of their planned airflow, it is time to check the key defuser again.  If the key diffuser is